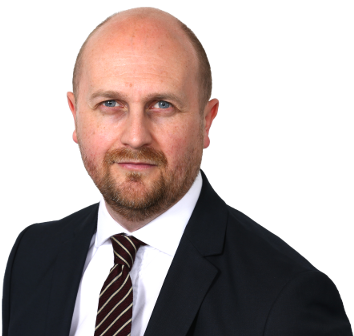 Stephen is the Co-founding director of Robert James Solicitors and he is also the Risk and Compliance Director and a solicitor in the firm.

Stephen is a well-established and highly experienced solicitor, with over 15 years' experience. He grew up in Liverpool and studied Law at the University of Central Lancashire, where he obtained an honours degree in Law (LLB), before passing the Legal Practice Course.

He trained with a large Personal Injury firm in the North West of England and qualified as a Solicitor in their highly respected serious injury team. Upon qualification he continued practising in personal injury and worked for a top 30 international law firm, where he was promoted to the position of Legal Director.

Stephen's most recent role saw him develop a niche practice dealing with commercial litigation and dispute resolution with a particular focus on medical and dental negligence and solicitors professional negligence claims.

Stephen is also experienced in defamation and misuse of private information claims, in addition to which he has been instructed by clients whose solicitors have been negligent in dealing with claims of this type.

Stephen's real strength is making his clients feel welcome and listened too, while maintaining a calm approach to the day to day running of his cases. Stephen is friendly and approachable and will consider all cases on a Conditional fee agreement (CFA) 'No win, No fee' basis.

Several of Stephen's cases have been subject to news media reporting and he has been interviewed by all major news broadcasters and appeared on national TV and radio.

In his spare time, Stephen enjoys spending time with his family and friends, and travelling to different parts of the world. He is a keen follower of Liverpool FC, American sport, and politics.